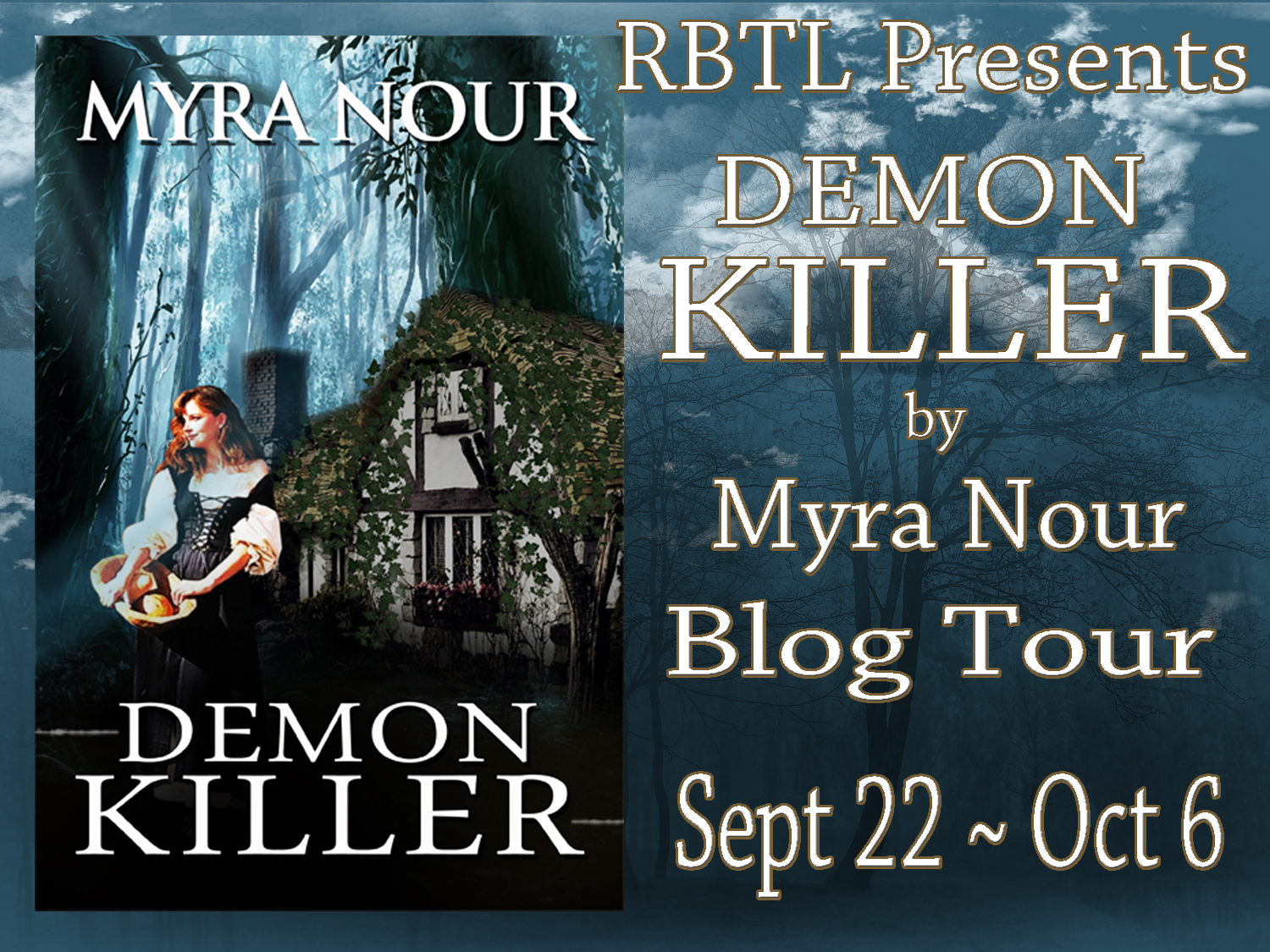 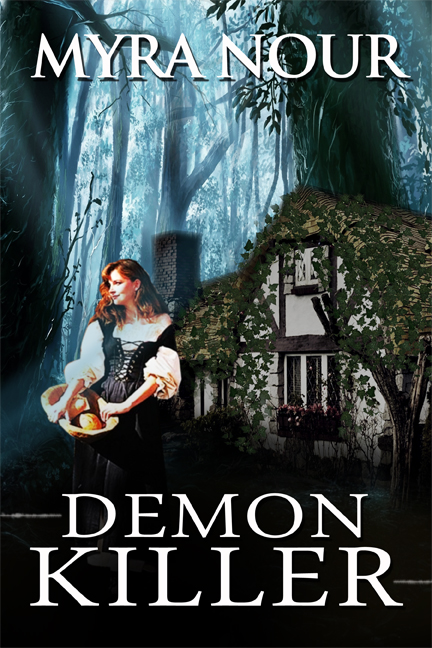 Title: Demon Killer
Author: Myra Nour
Series: Stand Alone
Genre: Paranormal
Publisher: Self Published
Release Date: July 2014 (Originally Published in a Anthology Shifter, NCP in 2002)
Editions/Formats Available In: eBook
Blurb/Synopsis:
Attacked by a soldier of the demon race, a young woman has a child from their union. To her horror, he bears the mark of the demon, and her people will stop at nothing to kill it. Being part fairy, Azra uses her magic to try and save her child from his demon blood. In spite of her best efforts, he briefly turns into the monstrous Sartwor beast, slaying her entire village.
A perilous journey to the home of the pure blood fairies ensues as she races to save Bretuck before he turns into the beast again. This time she may not be able to pull him from the grasp of the creature ruling his body. Can a mother's love prevail over her son's cursed blood?

Myra has been published since 2001 with Ellora's Cave and New Concepts Publishing. She decided in 2014 to take some of her books the Indie route, starting with Demon Killer. Myra loves to write stories with a mix of romance, s/f, paranormal and fantasy elements. Since April 2012 she is the CEO and co-owner of BTS Book Reviews, a digital magazine dedicated to promoting authors work and bringing great books to readers. Magazine at: www.btsemag.com.

The trees surrounding the glen where the witch was reported to live, were bent over and twisted into odd shapes, as if they suffered arthritic pains. It was dusky dark under those snake-like contortions of limb and leaves, and smelled of mold and dampness under the deep purplish shade. Azra felt sure sunlight had never touched the earth beneath the overhanging giants, yet the sun had seared her shoulders before stepping into the trees gloom but a moment before.
At first glance, she thought there was an overgrown hill nestled between the giants, but in reality, it was a profusion of vines and greenish-black creepers crawling into and over a tiny hut. A small door was barely distinguishable between the virulent growths, but someone kept the doorway cleared. Before her hand descended on the cracked wood, an ancient sounding voice called for her to enter. Her nostrils flared, offended by the strange smells emanating from within, the sickening mingling of ancient magic making it worse. Dark power. Dark magic. She shivered in reaction.
She found a haggard old woman with lank hair dragging the ground, sitting on a small stool and stirring a smelly concoction in a hearth blackened pot. The interior was darker than the tree shadows, relieved only by the hearth fire, which threw out shoots of sparks and faint light. It lit the witch’s face and Azra realized she’d held her breath for a horrified moment, for the old crone looked an ogre in its lair.
The woman grinned widely showing two bone white teeth, everything else in her mouth blackened or greenish with decay. Azra shivered as she realized how the witch’s appearance replicated the hut’s exterior, and the old sorceress knew well the image she created.
“Fairy child, come to the old witch for help, eh?”

Posted by Diana Marie Jacobsen at 8:02 AM No comments: 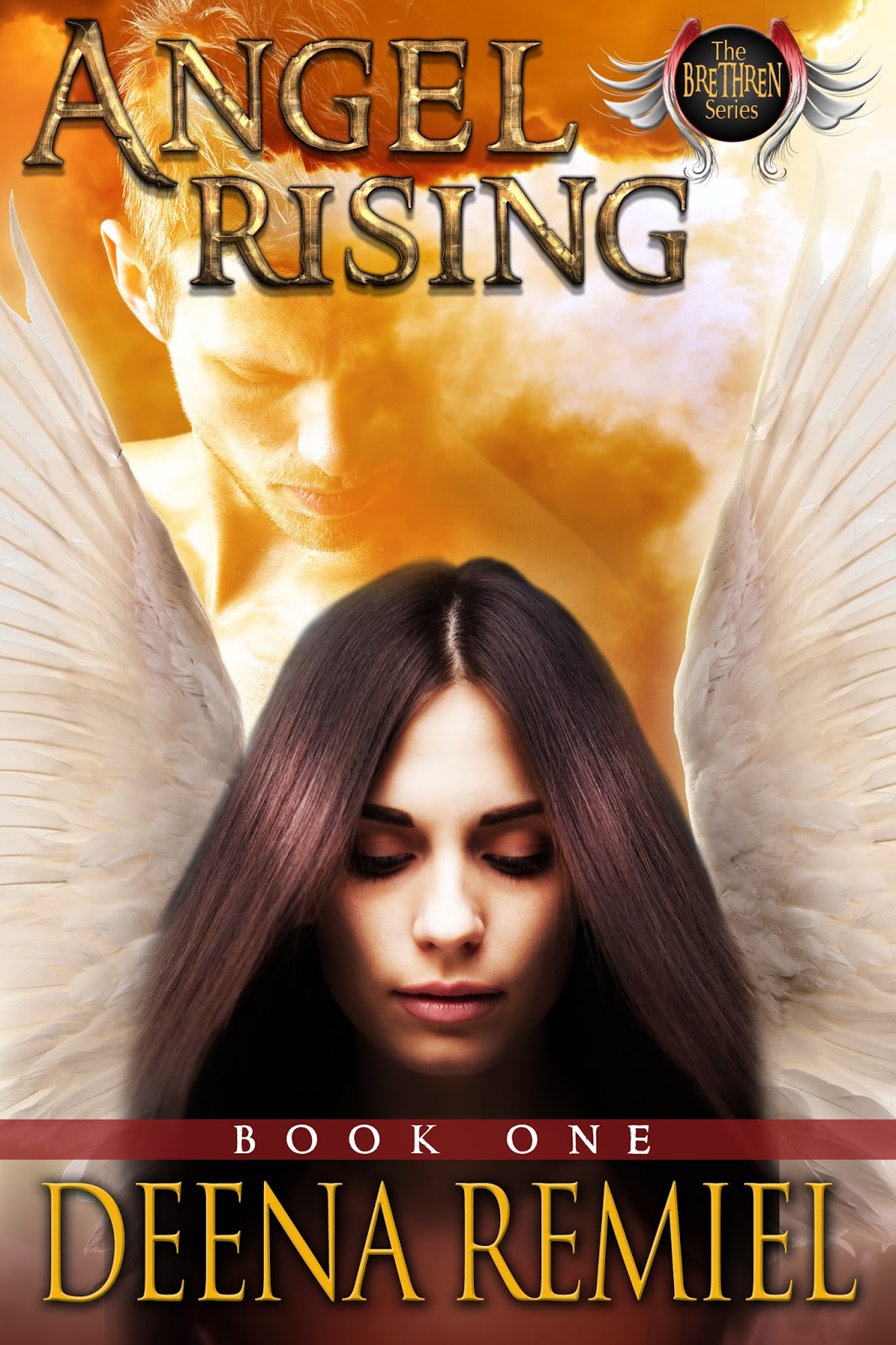 Angel Rising Blurb
Hannah Livingston has the most infamous stalker that ever existed- Satan. She spent her sixth birthday with the Brethren, fighting an apocalyptic war that sent the Dark Prince back to Hell, and the rest of her life wondering if he’d be back for her soul someday. She needn’t wonder any longer.

Gabriel Seeker, Brethren Protector, spends his days and nights rescuing kids from sex traffickers and protecting their lives from further damage. He knows all too well the nightmarish world they’ve been stolen into, and it’s gotten harder to keep secret his own past horrors.

Hannah and Gabriel have always gotten along, first as friends, then as co-workers. She manages his life and he protects hers. A perfect, symbiotic relationship, so it would seem, until suppressed feelings for each other surface and forever change the landscape of their lives. Stricken with PTSD, the determined angel seeks to protect the woman he loves from Satan’s greedy and insidious clutches.

Deceit and seduction, desire and repression, collide in this epic, immortal story of love, duty, and sacrifice.

“I believe a little meditation session would help.” He put his camera down on a coffee table next to a worn out cigar box. He took a cassette tape from it and popped it into an ancient stereo. “I made this awesome relaxation tape that’s perfect for this. Come sit on the floor with me and we’ll get back to balance.” He folded his legs as he sat down and waved her over. “Come on.”
At first, she resisted, but what harm could it do? “I do meditate. Just not consistently.” She sat down on the floor before him and crossed her legs so their knees touched.
“Now, hold my hands and close your eyes. Think of a peaceful place, calming energy, fluidity. You are one with the earth and sky.”
She acquiesced, and once relaxed enough, found herself on a lovely, deserted beach, wearing absolutely nothing. Seagulls cried, waves crashed against the shore, and the sun bathed her skin in warmth. A wisp of a breeze wafted over her and she raised her chin and arms in reverence. A light tap on her shoulder surprised her and she peered to her left. There was no one beside her. Another light tap, but on her other shoulder, and she twirled around in the sand, but again, no one was there.
She trudged through the white, silky sand to where the water kissed the land and knelt down to touch the foam before it disintegrated. As she stood, a hand reached out to help. She peered up and found Star standing before her, strong, virile, and very naked.
“You are the perfect addition to my real oasis. Welcome. You’ve come at an auspicious time.”
“I am? I have?”
“Yes. I am having a celebration.”
“What are you celebrating?”
“You’re existence.”
“And just how are you celebrating?”
“Like this.” He stepped toward her and swept her off her feet. Never taking his eyes off of hers, he walked them into the sea. As he lowered her to stand in the waist-deep water, he kissed each shoulder and doused them with the cool liquid.
She leaned in, intoxicated by the scent of man and ocean. She blazed a trail of kisses across his chest, licked his raised nipples, and trailed eager hands down his taut ass. He hardened against her stomach, and assaulted her lips with insistent kisses. He journeyed down her throat and raised her body up just enough for him to grab a breast with his mouth and flicked his tongue, creating a frenzied explosion of sensations low in her belly. He moved from one to the other, never letting up.
Wrapping her legs around his waist, she purred at his attentiveness. If he didn’t stop, she’d climax without him ever doing anything more.
“I want to feel you all around me, Hannah. Become one with me. Let me in.”

Posted by Diana Marie Jacobsen at 8:48 AM No comments: