BLOG TOUR AND REVIEW for IN THE NIGHT by KRISTIN STRASSEL 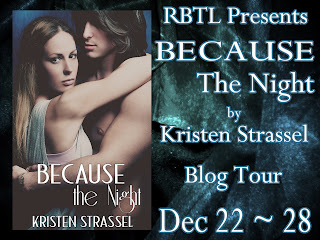 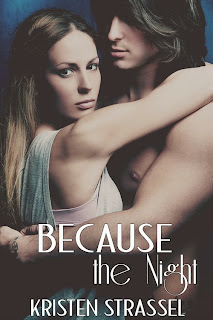 Title: Because the Night

Author: Kristen Strassel
Series: Night Song’s Collection Series (#1)
Genre: NA Paranormal Romance
Publisher: Foreword Literary
Release Date: Nov 5 2013
Edition/Formats It Will Be Available In: eBook & Print
Blurb/Synopsis:
Immortal Dilemma is the hottest band in the Las Vegas vampire rock scene. They draw insatiable fans from around the globe, thanks to a supernatural attraction called Bloodlust. Tristan craved such an opportunity to fill his empty mortal life, and now he has eternity to earn his place along the legends of rock n roll debauchery.
Callie always feared that Tristan’s excesses would get him into trouble, but she never thought they’d lead him to immortality. To reconnect with him, she must weave her way through a world not only she had no idea existed, but does not welcome her.
Blade turned down a spot in Immortal Dilemma after learning what he must sacrifice for that lifestyle. He finds Callie a refreshing change from the girls in the vampire rock scene. When Callie drags Blade back into the world of Immortal Dilemma, his resistance drives her into the waiting arms of Tristan, who shows her the true meaning of Bloodlust.
But the very things that Callie fights so hard to save are the very things that fight to destroy her. 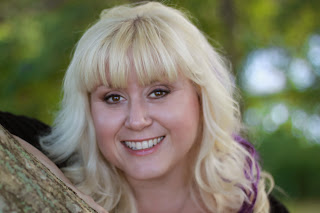 Kristen shares a birthday with Steven Tyler and Diana Ross.  She spends each day striving to be half as fabulous as they are.  She’s worn many hats, none as flattering as her cowboy hat: banker, retail manager, fledgling web designer, world’s worst cocktail waitress, panty slinger, now makeup artist and aspiring author.  She loves sunshine, live music, the middle of nowhere, and finding new things to put in her house.  Kristen is represented by Pam van Hylckama Vlieg of Foreword Literary.

Instead of bringing us out to seats in the audience, Tony led us to the side of the stage to a spot just behind the curtain, feet away from Tristan.  When he spotted me, he winked at me like we shared a private joke, and continued with his performance.  I sucked in my breath and held on for the ride.
Being so close to the band as they put on their show was much more intimate than the first time we saw them. The heat of the flash pots made the faces of the background dancers glow.  We moved out of the way as the roadies scrambled to change instruments for the band.  I strained my eyes to read all the notes plastered on the stage.  I peeked around the curtain every so often to get a look at the crowd, who were completely enthralled with everything the band did.
But mostly, I just watched Tristan.  Tonight he wore his signature black leather pants, which clung dangerously low below his hipbones.  They ended in black combat boots that were casually untied.  He topped the outfit off with a black T shirt adorned with an intricate white pattern that clung like a second skin.  His eyes were heavily rimmed with black liner and his hair hung in his face, down on his chest and back.  It swung around him as he roamed all over the stage.  His fingers moved over his guitar seductively, teasing it, bringing it to the brink of hysteria then coaxing it back down to a purr.  Almost as if he was making love to it.
The thought made me flush all over.  I could hardly bear to watch him, but I couldn’t look away.
Tristan walked off the stage before I was ready to stop watching him.  He came right to me.
“Look who’s my date tonight,” his eyes moved down my body.
“You have a date tonight?” I glanced behind me before it hit me. He meant me.
“Yes,” he reached out and put his hands on my hips.  Even after running around on stage under those bright lights for over an hour, he hadn’t so much as broken a sweat. His stage makeup was still perfect.   He leaned in so he could speak close to my ear.  “And she looks fabulous in her little black dress.”
“Thanks,” I managed, but it didn’t seem like enough, looking up at Tristan, with his eyes just inches from mine.  We might as well have been in another universe. The music on the stage had resumed.  “Don’t you have to go back out on stage?”
He shook his head, his eyes never leaving mine.  “It’s just his solo.  And truthfully, Callie, the show will start again whenever I decide to go back out there.  They can wait.”
“Oh.” I gulped so hard it hurt.  What was he going to do?
“But I am going to go back out there, just for a few minutes.  I want this part of the night to be over so I can spend the rest of the evening with my date.”  He leaned in, kissing me chastely on the lips, like we had just done this yesterday, like he hadn’t ever walked out of my life, and then turned to walk back out on stage.   My legs felt like jelly.  I wrapped my arms around my midsection and half leaned, half fell against the equipment case next to me.  Every time I looked at him, I slipped in deeper over my head.
Keisha brought me back to this realm by whacking my arm.  “Girl. That was hot.”

Kristin Strassel’s ‘In the Night’ was quite a breath of fresh air so to speak.  I loved Callie and Tristin.  First Callie is not perfect which I loved because you could identify with her.  Tristan on the other hand was the epitome of the bad boy persona.   The story had a feel of Anne Rice’s “The Vampire Lestat’.  The author had a way to pull me into the story and made me feel as if I was there in the pit singing with the band.  I look forward to what this author has in store for us next.
Posted by Diana Marie Jacobsen at 7:00 AM