BLOG TOUR and REVIEW ~ for ~ THE GODDESS'S WISHES ~by~ LISSETTE E. MANNNG 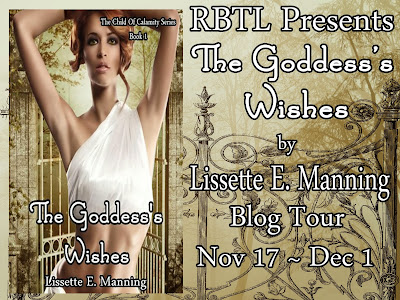 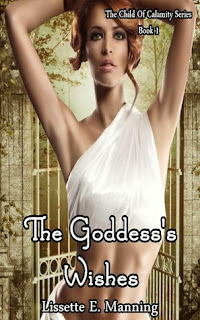 Title: The Goddess’s Wishes
Author: Lissette E Manning
Series: The Child of Calamity Series (#1)
Genre: Fantasy/Greek Mythology/Science-Fiction
Publisher: L. D. B. Press
Release Date: October 2 2013
Edition/Formats It is Available: eBook & Print
Blurb/Synopsis:
Her wish is their command.
Artemis has a plan. Her eye has fallen on the throne of Olympus, and she’ll do anything to get it. She knows Zeus won’t give it up so easily, but she’s determined to dethrone him, none-the-less. Her father is known for his infamous romps amongst the mortals. Surely, there must be something she can use against him?
When her attention is drawn to Callidora Spiros, she soon realizes that her father does indeed have secrets. Brazen and beautiful, the girl piques her interest in more ways than one, though Artemis isn’t quite sure as to how she’s truly tied to the gods. Intent on discovering what her father has kept hidden for so long, she’ll need as much help as she can get.
Demanding and willful, Artemis has been known to achieve her every whim. With the bat of an eyelash, or a simple word, she’s wrapped many a man around her little finger. The gods, on the other hand, aren’t so easy to bring around. Never-the-less, she’s going to do everything possible to gain the upper hand. Mount Olympus will be hers, with or without the help of the other gods and goddesses. 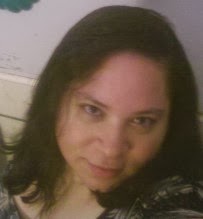 Lissette E. Manning is an author from Connecticut. She has been writing since she was six-years-old and spends most of her time trying to place her thoughts into order and giving life to the stories that are always brewing inside her head.
She enjoys reading books, listening to music, playing the occasional video game, watching movies, and spending time with friends and family. She's also a bit of a computer geek.
Her writing genres of choice are Science-Fiction/Fantasy, Romance, Paranormal, Short Stories, as well as Poetry. She's currently working on several projects due out sometime in the New Year, as well as finishing her NaNoWriMo project, The Corsicanth Princess.

Artemis materialized in the middle of her brother, Apollo’s, bedroom with a resounding pop. A smile of satisfaction spread across her lips as she watched him scramble out of bed in search of his clothes. A look of annoyance clouded the features of the demi-goddess lying on his bed, clutching the bed sheets tightly to her chest.
Her silvery-yellow eyes narrowed as she stared at the demi-goddess, Dyina, and pointed to the adjacent door. “Get out!”
“Damn it, Artemis!” Apollo growled as he tugged his chiton into place. “Can’t you knock?”
Artemis grinned, and made her way toward the chaise lounge tucked into the left corner of the room. “Where’s the fun in that, brother?” she quipped, lowering her slender frame onto the settee.
The demi-goddess rummaged about the room for her clothes, her blue eyes sending imaginary vicious daggers in Artemis’ direction. The goddess’s smile never faltered as she watched her brother and his current paramour move about the room. Apollo took a moment to show Dyina to the door, his shoulders taut with tension as he swung the door closed.
“I’m assuming you’re here for a favor of some kind?” Apollo asked, running a hand through his thick blond curls.
“Something like that.”
He approached the table nearby, and poured himself a glass of red wine. He knocked back his drink in one gulp, and promptly poured himself another before taking a seat in the chair in front of the lounge she reclined on.
“What now?”
She bestowed him with a knowing gaze, her lips quivering with effort as she tried to hold back her excitement. “I want Mount Olympus, brother, and you’re going to help me get it.”
He snorted with amusement, and downed the glass of wine. “A lofty goal, Sis, but that’s not likely.”
Her smile disappeared, her eyes narrowing to half slits. “I expected more from you.”
He summoned the pitcher of wine, and filled his glass once more. “Do you honestly think dear old Dad is going to give up the throne so easily?”
“No, but that’s where you come in. He owes us. Besides, we’ve always been his favorites.”
“Whether he owes us or not, Artemis, you’ll never get him to step down.”
“Not yet, but I will. And when I do, Mount Olympus will be mine!”
Apollo tossed his head back, and laughed heartily. “So you think. There’s a good many of us with an eye on Daddy’s throne. You’re not likely to get it, nor are any of us.”
Her nostrils flared outward with anger as she stared at her twin brother. “You owe me.”
“I’ll pay up. Eventually.”
She sat up straight, staring deep into her brother’s eyes. “You’ll pay up now, brother dear. Zeus has been careless, and I intend to unmask him before the other gods and goddesses.”
“How, pray tell?”
A photograph materialized in thin air as she flicked her hand about. He deftly caught the glossy paper between his fingers, and examined it.
“Who is she?”

I have always loved anything about the gods. The Goddess’s Wishes by Lissette E.Manning is a wonderful read into the life of Artemis.  This short story is intriguing and left me wondering what would happen next.  The myths behind the Greek Gods have always been alluring and the author captured that allure factor of the gods in this story.   Artemis is on a quest to find the bringer of Calamity, will she find her in the end?  The goddess also wants more so much more, will she be able to claim what she truly believes is hers. I look forward to what the author has in mind for us in the next book.


*DISCLAIMER* I was given this book as a free ACR copy in exchange for an honest review.