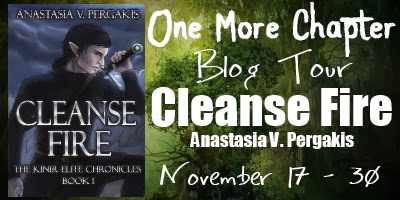 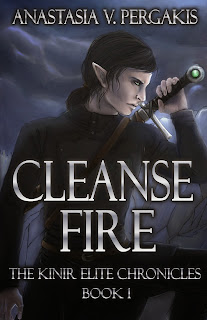 Complete the mission, no matter what…

Captain Derac Vidor protects everything he cherishes with a vow and his sword. After twenty years of service, Derac and his team are betrayed with deadly consequences. Evidence points to someone on the inside.

Treason is only the beginning…

No place is safe when a trifocal conspiracy is uncovered. The team must hold out long enough to discover the truth in a web of deceit, fear, and hatred. Time is running out and their allies can only help so much.

The past holds the key…

Clouded memories and forgotten truths hold the answer to saving the team. Can Derac face the gruesome nightmare in time?

A grudge can only wait for so long…

Excerpt:
The blonde in blue floated her way to Rakan and sat down in his lap with a giggle. Jardel got a bouncy brunette to land in his lap. Derac was not paying attention and the other blonde in red planted herself on his knees. His head snapped up to look at her.

Derac set his face in a grim line. He put his hands on her waist, picked her up and put her on her feet. "I'm not interested, but thank you for the offer."

She pouted and slowly walked away, swinging her hips. Derac sighed and returned to looking at the ceiling.

"That was not very nice," Vivian pouted from Tyn's lap. "You could have at least talked to her."

Derac growled. "Look, while I'm flattered that she would choose me, I am not in the mood, all right?"

"How can you not be in the mood?" Vivian said. She didn’t hide her offense at his words. "Making love is the best thing in the world." She leaned her head back and laughed. Tyn planted a kiss on her collar bone. She giggled and looked at Derac daring him to prove her wrong.

Derac leaned his elbows on his knees and put on his best charming smile. "Why would I pay a woman to be with me when I could have a warrior elf with the perfect body?" He turned his head and winked at Kie. She played along and winked back at him.

Aeli looked at Kie in shock. Derac put his hands behind his head and reclined in the chair again, a smug look on his face. Tyn laughed with Vivian but Jardel and Rakan were too distracted by the girls in their laps to pay attention.

"Well, let me show you to your rooms then," Vivian said with a giggle.

She stood and took Tyn's hand and led him through the silk curtains hanging across the doorway. The group picked up their packs and followed them down the hall lined with doors covered in silk to give the appearance of having no doors at all.

Vivian opened the door to one room and Jardel and his girl fell into it with a laugh. Derac growled under his breath. The room across the hall became occupied by Rakan and his blonde.

At the next door, Vivian turned to Aeli. "I can get a man for you if you like," she smiled.

Aeli smiled. "No thanks. I'm much too tired, and I fear he would be disappointed."

As she closed the door to her room, Derac caught her rolling her eyes. He held back a smirk as they continued down the hall. She opened another door and waved her hand dramatically to both Kie and Derac.

Kie opened her mouth to protest but Derac shoved her into the room. He flashed a grin to Vivian and Tyn and kicked the door shut.

"What are you doing?" Kie whispered in a harsh tone.

He held up his hands to stop her. "I just wanted to get away from that Vivian woman. If you had protested, it would have taken longer that I would have had to deal with her."

Kie crossed her arms over her chest. "That's not the point! The whole team will know we are in the same room - in a brothel!"

"What is the problem with that? We've shared rooms before." He grinned wickedly. "We've even snuggled on the floor of a cave remember?"

Kie huffed and flopped down in the velvet covered chair in the corner. Derac cast his gaze around the room and curled his nose. Silk sheets on the four post bed. Silk on the wall. Shag red carpet and velvet seat cushions.

A knock sounded and Derac swung the door open in a wild fashion.

Tyn’s eyes winkled at the corners with his large grin. "I told Vivian you two would need extra blankets. So you can make an extra bed. There are gowns in the wardrobe if you want."

"Thank you," Derac took them and shut the door again.

"At least Tyn is thinking rationally," Kie muttered. She went over to the wardrobe and swung open the doors. "Gowns? Is he serious?" She pulled out a paper thin cotton shift with no sleeves. The low cut collar and see through material made Kie gasp in shock.

Derac smirked. "I bet it's comfortable."

Kie rolled her eyes and put it back into the wardrobe. She dug around and found a cotton gown not quite so transparent.

"I guess this will have to do. I am sick of sleeping in my uniform."

"Me too but I doubt there are sleeping clothes in there for me."

"Then wear nothing. Maybe then that blonde could have an easier time of getting you in the mood." She titled her head back, the maniacal laugh bubbling from her throat.

“I told you, why pay a woman to be with me when I can have an elf with the perfect body?”

“Oh? You think I’d just bend to your advances, hmm?”

He smirked. “I know you would.”

Three long strides carried him across the room. He wrapped his arms around her waist and pulled her against him.

“I’ve proved my point. Look at how your breath hitches and your heart beats faster.”

“Th…that’s because you startled me.”

He chuckled deep in his chest.

“Let’s talk about you then,” she said. “How your grip tightens on my waist when I try to pull away and your own heart is thundering in your chest. Or how you can’t stop looking into my eyes whenever we gaze at each other. Or how badly you want to kiss me right now.”

“Do you want me to kiss you?” he said, his voice husky and deep.

She swallowed hard. “Yes,” she whispered.

Derac didn’t hesitate and captured her lips with his. The voice in his head telling him he shouldn’t kiss her was silent. The softness of her mouth drowned out all other thoughts in his head.

Her lips parted in invitation. His tongue traced the lines of her lips before plunging into her mouth. Her vanilla scent filled his nose, and he inhaled it deeply. She rose up on her toes, her body pressing closer to his. His arms tightened around her. Derac’s hand roamed up her back and then gripped the back of her neck.

His mind cleared, the only thoughts were how she molded perfectly to him and the feel of her soft mouth.

Derac nipped at her bottom lip. “See? You can’t resist me,” he murmured.

“Hmm, more like you can’t resist me. I’m the elf with the perfect body, remember?”

“Honestly, I really can’t tell with your uniform on.”

“Is that an order to remove my clothes, Centurio?” she whispered.

A growl rumbled deep in his throat. “Would you defy the order?”


My Thoughts
Cleanse Fire by   Anastasia V. Pergakis is a well written high fantasy story with a Tolkienesque feel.  The main character, Captain Derac Vidor has lost his wife but duty calls and he must continue in his quest.  The battle scenes were reminiscent of a well -planned war.  The characters are likeable and exceed an almost human personality, with a three dimensional element. They are not your run of the mill characters, they have been well thought out.   A must read for any person who likes dragons, fairies, and elves. There is also a side story of love and survival that will have any reader tugging at their heartstrings.  From page one I was entrenched into the story and waited with baited breath for what would come next.  I look for the next in this series.


*DISCLAIMER* I was given this book as a free ACR copy in exchange for an honest review. 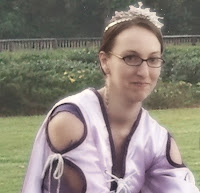 Anastasia knew she always wanted to write. She began at a young age, writing those little stories about the apple tree in the yard. Though her love of stories stayed with her through her poetry stage in high school, she didn’t begin writing novels until she was almost an adult. That’s where she found her true passion. Her characters visit her dreams – and sometimes during the day – to share their stories with her. Anastasia is merely the writer, but the characters are really the storytellers. Anastasia lives in Columbus, Georgia with her husband, son, and two black labs. She loves designing books and websites during the day, then writing furiously at night.

a Rafflecopter giveaway
Posted by Diana Marie Jacobsen at 7:30 AM