BLOG TOUR FOR THE LAST KISS by M.R. Murphy 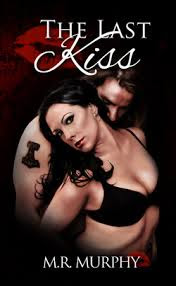 Excerpt from Chapter 2:
Watching Raeve from the bed as she brushed through her long black hair, Aidan finally felt a moment of peace. It had been months since he enjoyed the sweet hum of her voice as she sang along to whatever song she was listening to. Making another deposit in his memory bank, he drank in the sight of her twisting her hips to the rhythm of the music. Smirking, he couldn’t help remembering all the delicious ways her body worked him over with each new encounter. Her luscious curves were accented by her black satin nighty. It begged him to touch every inch of her supple flesh. Eying the piece of fabric, he was more than ready to discard it from her sinuous body and replace it with the feel of his skin on hers. The rigid length that hid beneath the suffocating confines of his jeans bounced in appreciation of the view as his heated stare nearly burned through the small scrap of fabric covering her petite body.
He caught her glancing back at him, under a fringe of dark lashes. The quirk of her smile and blush of her cheeks in the reflection made her look all the more resplendent. It was that same smirk she held while she served him dinner, and settled in his lap to distract him from eating. His stomach never refused a home cooked meal, but he was lost to hypnotic spell. A sultry grin spread across her face as she wrapped her arms around him. Slowly he inhaled her sugary scent, pulling it deep into his lungs. His tongue burned for one more taste of her, but one more  would never be enough. His eyes danced up and down her body as she finished her nightly routine, and his palms grew slick as every ounce of blood rushed straight down to his aching cock.
She was fire, and he loved to feel her burn. Picturing every way he was going to please her with a calculating stare, relenting even if she begged wasn’t going to be an option until every muscle in her body shook with sated erotic pleasure. His pulse quickened as he felt the heat of desire lick up his skin, making every muscle taut and ready to spring free to lock her beneath him for endless hours of carnal worship. His mind raced, trying to remember every detail of the moment, storing it away for the long nights that awaited him in the coming weeks. She had no idea how beautiful she was to him. If all he had to offer her was a few solemn promises of love, and a few nights of unbridled passionate loving making, then he could die a happy man knowing he gave her everything he had.
“What?” she giggled, eying him in the mirror’s reflection.  He marveled at the sight of her smile and how it reached her eyes and shone brighter than any star he had ever seen.
“Nothing, I just love looking at you. Does it bother you?” he countered, cocking the dark slash of his brow.
“Depends.” Sliding a quick wink over her shoulder, Raeve turned back to her image as she ran another stroke of the brush through her silky hair.
Considering that for a second, Aidan quirked a smile, ready to hear her explanation. “On what?”
“On what you’re seeing when you look at me,” she challenged.
Climbing off the bed, his six foot three frame was nearly double the size of her body and close to a foot taller. His gaze stalked her once again as he sinuously stepped closer to her. His fingers begged to tangle through the long tendrils of her silky hair as he pulled one lock up to inhale her sweet scent.
“What I see when I look at you,” he purred, his deep penetrating voice vibrated in the air, lingering between them, “is the only woman who has ever broken my heart and healed it. I see a beautiful woman who cares for so many, but denies being taken care of herself.” .© 2013 The Last Kiss M. R. Murphy
You can purchase the book at the following:

The Last Kiss by M.R. Murphy is a beguiling love story. Raeve and Aiden find each other, fall in love only to be torn apart by circumstances beyond their control.    Raeve is a woman who never thought much of herself, she continued on with her life only for it to be full of hurt the kind that is hard to come back from.   Finally she is able to rid herself of the evil that has tried to destroy her life.  She again finds herself in the strong comforting arms of Aiden, but will it last? This beautiful story just goes to show that a love by two people who go in different directions can reconnect once again.  This story made me cry, made me angry which are all emotions made to come alive from a great story teller.  M.R. Murphy is an author to keep an eye on in the future.