REVIEW OF FOOL by Christopher Moore 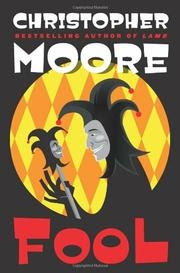 A man of infinite jest, Pocket has been Lear's cherished fool for years, from the time the king's grown daughters—selfish, scheming Goneril, sadistic (but erotic-fantasy-grade-hot) Regan, and sweet, loyal Cordelia—were mere girls. So naturally Pocket is at his brainless, elderly liege's side when Lear—at the insidious urging of Edmund, the bastard (in every way imaginable) son of the Earl of Gloucester—demands that his kids swear their undying love and devotion before a collection of assembled guests. Of course Goneril and Regan are only too happy to brownnose Dad. But Cordelia believes that her father's request is kind of . . . well . . . stupid, and her blunt honesty ends up costing her her rightful share of the kingdom and earns her a banishment to boot.

Well, now the bangers and mash have really hit the fan. The whole damn country's about to go to hell in a handbasket because of a stubborn old fart's wounded pride. And the only person who can possibly make things right . . . is Pocket, a small and slight clown with a biting sense of humor. He's already managed to sidestep catastrophe (and the vengeful blades of many an offended nobleman) on numerous occasions, using his razor-sharp mind, rapier wit . . . and the equally well-honed daggers he keeps conveniently hidden behind his back. Now he's going to have to do some very fancy maneuvering—cast some spells, incite a few assassinations, start a war or two (the usual stuff)—to get Cordelia back into Daddy Lear's good graces, to derail the fiendish power plays of Cordelia's twisted sisters, to rescue his gigantic, gigantically dim, and always randy friend and apprentice fool, Drool, from repeated beatings . . . and to shag every lusciously shaggable wench who's amenable to shagging along the way.

Pocket may be a fool . . . but he's definitely not an idiot.

Christopher Moore’s retelling of Shakespeare’s King Lear in his novel Fool uses once again his witty and bawdy humor.  It is a laugh out riot.   Who else but a Fool and the king’s fool at that can say whatever he pleases.  When King Lear asserts that his three daughters Goneril, Regan,  and Cordelia tell him how much they love him, the adventures begin. Follow Pocket the King’s Fool on his quest to get the youngest daughter of Lear back into her daddy’s good graces. He must also rescue his apprentice Drool from the clutches of Edmund the son of the Earl of Gloucester. It is filled with plenty of lewd jokes and plenty of shagging on the part of Pocket.  Pocket must also stop the villainous power plays on the part of the other two daughters and the occasional assassination attempts.
Put into the mix the three witches of MacBeth and there is plenty of “double, double, toil and trouble….” Along the way you will meet many other characters in some of Shakespeare’s writings.  If you are a fan of Shakespeare and Moore this is a definite must read.

PICK UP YOUR COPY OF ANY OF HIS BOOKS AT THE FOlLOWING:

BARNES AND NOBLE
Posted by Diana Marie Jacobsen at 9:35 AM