will leave you breathless!! 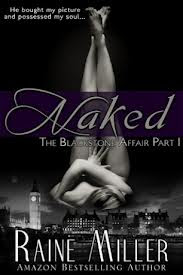 Brynne Bennett has left scandal in her past and is living the good life. An American grad student at the University of London and part-time photographic model, she’s getting back on track with lots of hard work and focus on a career in art conservation. When successful and charismatic London businessman Ethan Blackstone buys her nude portrait, he wants to possess more than just her image. He wants Brynne in his bed, serving him in every way possible. He has no trouble voicing his desires, and he isn’t taking “no” for an answer.
At first, his dominant nature captivates her, but it isn’t clear if the force of his powerful desire will ultimately awaken or dispel the demons Brynne is carrying inside. There are secrets on both sides of this relationship—huge ones. Can Ethan erase the scars of Brynne’s past so that she can reveal her true self to him? Or will the shadows cast by Ethan’s own mysterious former life destroy their chance at happiness?
Naked is the sizzling, unforgettable story of what happens when a strong woman meets the one man powerful enough to strip away all her defenses, leaving her standing naked and perfect before him.

Art is a beautiful thing and when Brynne poses nude for her favorite photographer it makes her feel like the most beautiful woman in the world.   However, when millionaire Ethan Blackstone sees her portrait at a local museum he sees the beauty underneath the skin and he is immediately drawn to find out more about this intriguing woman. On his quest to pursue the beautiful Brynne he is compelled into a life of cover- ups and must do what is needed to keep her safe.  But there is a secret that Ethan does not tell Brynne, one that is devastating enough that it could destroy the love they share with each other.
Raine Miller has crafted intrigue and eroticism into Naked, the first in her new series The Blackstone Affair.  She shows us what it means to be loved and to be enraptured up in that unprecedented love similar to Brynne and Ethan’s.  Brynne is not ready to admit her feelings though her heart is telling her to; but when she does Ethan will be the man to pick up the pieces.   Ethan Blackstone is devilishly handsome and sensually wrapped up in a sexy British package, he is the epitome of sex.   Each page is bursting with sex, love, and even a tragic cover up.  This is a classy, sexy story that will leave you breathless at the end.

PLEASE PICK UP YOUR COPY AT THE FOLLOWING:
AMAZON

BARNES AND NOBLE
Posted by Diana Marie Jacobsen at 4:13 PM