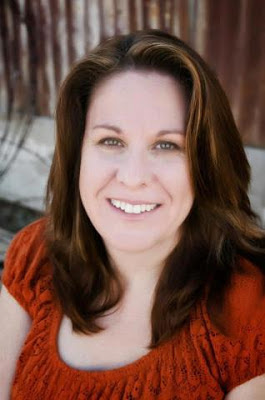 Rhonda Plumhoff a native Californian is married and a mother of 4. Rhonda worked as a full time trained Optician for many years, but knew in her heart something was missing. Reading romance novels and creating new recipes were her passions in life, and the one thing that made her soul come to life. One day she realized book characters spoke to her through food and related everything she read as a potential new recipe. Erotic stories were missing one key element, food and not just food, but sexy food that would set the mood for those special moments. After meeting a few authors and discussing her ideas, she asked if she could create recipes for their characters. The response from the writing community was overwhelming.  What was once a dream has now become a reality and a full time job. Every story and every literary character live through Rhonda as food.

Q:  I know you have lots of things in the fire.  I would like to discuss your new Facebook page men read romance. What are your hopes for this page? How did this page come to light?

Rhonda:  I’m not quite sure where this page will end up. I was actually tired of never having anything to discuss with my husband, I wanted him to read something he considered a girls book. He was pleasantly surprise by what he read. My original intention was to pull your typical male reader out of his comfort zone and introduce him to books that are generally labeled women’s books; either by getting them to read books that had some romance but not pushing it down their throats or introducing new Genres of Romance. I hope to one day have a small panel of men that female writers can go to as a resource for ideas and communication.

Rhonda:  Food, romance, sex kind of all go hand in hand. Certain foods are considered sexy foods; they arouse sexual feelings or just generally make you feel sexy. I took those foods and created the recipes, and then with the help of some amazing friends they wrote short stories around the recipes.

Q:  There are some very um clears throat very evocative titles for your recipes.   Where did the titles come from?

Rhonda:  That’s very funny, naming recipes has always been my down fall. A few recipes were inspired by sexy male characters in books that I happen to be reading at the time I was developing recipes. Others were puns off the ingredients. Best part was a chat forum I was in one night, I put them all to work throwing out random words and name to finish the titles. We had so much fun naming some of the recipes.

Q:  I notice the last few recipes have vaguely familiar names attached.  How did you choose those particular names and why?

Rhonda:  Those particular guys really fire up my imagination, when I was stuck for idea’s I would read their stories again and the creative flow would start again. So as a tribute to them I felt they needed to be included in some way.

Q:  Now let’s discuss literary chocolate 2.  Will we see the same beloved characters or new ones in this new cookbook?

Rhonda:  I had so much fun writing this book, there are all new characters in this book. I believe there are 5 returning authors but with different characters. 18 authors in all and 35 character recipes.

Q:  How did the idea come about to write a literary chocolate cookbook 2?

Rhonda:  I had so much response to book one, that I had left over characters (no pun intended) from book one. I had authors asking me to create recipes for their own books, for their characters to prepare. Before I knew it I had a stack of characters that needed recipes and a home to put them in. So we started book 2.

Q:  What is the process it takes for you to write a cookbook especially the ones like literary chocolate which includes characters from your favorite books?

Rhonda:  It’s an odd process well for me. I begin with a general outline, theme or ingredient. Everything I do, everywhere I go and everything I read will trigger some sort of idea. I carry note pads with me everywhere because I never know when an idea will hit me and what ingredients I will need. You will find notes everywhere in my house and I mean everywhere. The hardest part for me and I see it happen to others as well, I want to work on chocolate recipes today but my brain is shooting out pumpkin recipes and vice versa. So I’m usually always writing recipes down, I may have no idea what I’m going to do with them but their there.  I have stacks of recipes that I have no idea what to do with.

Q:  Do you have any more cookbooks in the fire so to speak?

Rhonda:  I’m going to take some time away from the cookbooks, after 9 in 16 months my brain is fried. I’ll focus on other areas of my life. Eventually I want to write a 3rd pumpkin book, the recipes are already created I just need to pull it together. I’ve started a girl’s night in, kind of recipe and party idea book. I have a few recipes that I want to work into a book about kicking up old school recipes with today’s ingredients. The books are all there so eventually they’ll want to come out and play.

Q:  Out of all the cookbooks do you have a favorite recipe that you like to prepare for your family?

Rhonda:  YES!!! In the new Literary Chocolate, a second helping there are 2 recipes that my family and friends fell in love with and constantly ask me to make. One is a steak with a wine and mushroom sauce, girlfriends love it and request it for girls nights. Then a Norwegian chocolate cake that my daughters fell in love with and both requested as their birthday cakes last year.

Q:  Would you ever consider writing other books besides cookbooks?

Rhonda:  I wish I had that kind of talent; I love to read and think if my books were taken away I would lose my mind. But I also know where my talents lie and it’s not in writing. My oldest daughter shows promise in that area but I think I will stick to the kitchen. I don’t consider what I do as writing as much as creating and to me you need to be able to do both to write a character the world will love.

PLEASE PICK UP YOUR COPIES AT THE FOLLOWING: 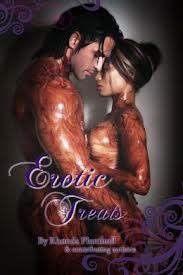 LITERART CHOCOLATE, A SECOND HELPING AT BARNES AND NOBLE 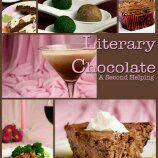