A Mythical Story of epic proportions 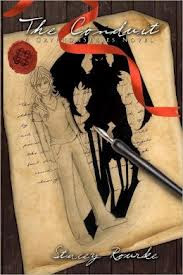 All 18-year-old Celeste Garrett wants is to head off to college and make those fun, yet ill-advised, choices college kids are known for. And maybe to spend some time with the hot cameraman she just met. Instead, because of a pact her ancestors made in the 17th century with a mythical creature, she has to save the world.
While normal kids are slamming energy drinks and cramming for exams, Celeste will get her adrenaline rush fighting a fire breathing dragon. She wants to meet friends in the quad to exchange lecture notes, but first she must exchange blows with a shapeshifting demon on the rooftop. Life isn’t always fair for a superhero, but at least she doesn’t have to do it alone. With her brother and sister as sidekicks, they alternate between saving lives and getting on each others’ nerves. Together the trio encounters unspeakable odds, mystical forces and comes face-to-face with an image that will haunt them forever—their grandmother in a leopard print bikini.
"Okay, little side note here. If a psychopathic killer asks if you want to see a trick, say no. That’s the smart thing to do. I, on the other hand, responded, 'Bring it'."

Have you ever wanted to be a superhero, well Celeste just wanted to be a normal college kid but things so didn’t go as planned.  Imagine three siblings who emerge into powers beyond their wildest dreams.    In her first in the Gryphon series, The Conduit, Stacey Rourke has succeeded in reaching for the stars.  Celeste being the oldest sibling must protect her family at all costs.  She must call on a higher power, an ancient magical creature to help save her family.  This is her destiny and one she will gladly accept to fight the enemy.  The author’s witty and humorous one liners will keep you entertained till the end.  The plot is well thought out and will leave you wanting more.  A must read for fans of anything mythical.

PICK UP YOUR COPY AT THE FOLLOWING:


BARNES AND NOBLE
Posted by Diana Marie Jacobsen at 9:54 AM