Not your typical love story!!!!! 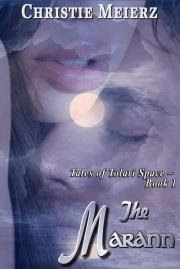 Marianne Woolsey was a hyperpolyglot, teaching Spanish at Reagan High in Casey, IA, when Earth Central Command decided her talents were better exercised teaching the daughter and heir of an alien ruler on a planet 24 light years from Earth - for 26 years. Now she's alone on a planet of aliens so humanlike that she has to keep telling herself her student's noble father is just her boss.
Handsome and deadly, the Sural has ruled his province and led his planet far longer than he can admit to his daughter's human tutor. He hides much more from the space-faring races of the Trade Alliance than he is willing to reveal. What he doesn't want Central Command to know, he has to conceal from Marianne, but Marianne is concealing her own secrets - and as an empath, he knows it.
The first novel in the Tales of Tolari Space series explores what happens when you put an unsuspecting human on a planet full of empaths.

Christie Meierz brings about a "Big Bang" explosion with her story The Marann. It is the first book in the Tolari Space Tales.  This book will completely leave you intrigued and wondering the ethereal question... What it would be like to live on another planet?  This author gives you a hint of one option of what it could be like. You will love the relationships, and the tenderness between a human and the other planet's ruler.

PLEASE Pick up your copy at the following retailers:


BARNES AND NOBLE
Posted by Diana Marie Jacobsen at 9:21 AM