INTERVIEW WITH A. B. MCKINLEY 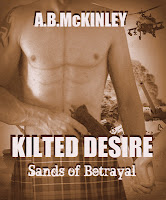 Recently, I had the opportunity to interview Author A.B. McKinley and ask this Scotsman some really fun and intriguing questions. It was certainly my pleasure getting to know this truly wonderful author a "wee" bit better. So sit back with me and enjoy listening to his Scottish "brogue" as he answers my questions and we discuss his first book. (And ladies, the "brogue" is hot and throughout the book!)

Q:  What compelled you to write a romance novel?

A.B. McKinley:  After everything that happened tae me, lots of people kept telling me I should write a book, so I did! This was the first thing I’d written since High School so I knew nothing at all aboot the writing industry. There was a romance element in my story and I did a wee bit of research and found oot that the romance genre was the most popular, so I focused the story on that element, with a wee bit of action and adventure added in.

Q:  Being a man, was it difficult for you to write the love scenes?

Q:  What sports have you played?

A.B. McKinley: Soccer and Martial Arts (mainly Kickboxing and Thai Boxing) tae the highest level, but over the years I’ve also been involved in or played Rugby, Athletics, Golf, Table Tennis, Motorcycle racing plus many more. Also I competed in many Triathlons.

Q:  What sports do you enjoy watching?

Q:  How did you come up with the idea for MacHollister fragrance for Him and for Her?

A.B. McKinley: I was just joking around on fb and someone who makes and sells fragrances saw the picture and decided they wanted tae try and market it.

A.B. McKinley: A haggis is a small furry creature, a wee bit smaller than a domestic cat. It has short legs and a medium length tail. They inhabit the Highlands, living mainly in the lower elevations, Haggii (plural) are shy creatures and tend tae avoid contact with humans. They are herbivores and eat mainly grass and the leaves of some plants. Haggii are hunted fer food but they are an acquired taste nowadays and are nae longer as popular as they used tae be.

Q:  Please explain to the readers what the S.A.S. is.  I understand for those in the U.S., it is kind of like our Military.

A.B. McKinley: The SAS or Special Air Service is a Special Forces regiment of the British Army. It is the oldest and most elite Special Forces unit in the world and is the model that every other countries special forces units are based on. Although we were often compared tae the Navy seals ( I do it myself sometimes when I dinnae want tae get in tae a long discussion explaining things) the closest American equivalent would be Delta Force. The seals are a obviously a Navy based unit while we are an army unit. Our SBS or Special Boat Service is the equivalent of the Seals. Both countries Special Forces are exceptional and have worked closely on many missions over the years. I cannae go in tae details but I have personally worked with Seals and Delta Force and been involved in training them in the past and always found them tae be excellent.


Q:  Aside from sports, what is your favorite comedy on TV?


Q:  Do you really have a name for your television?  What is it?

A.B. McKinley:  Yer ask that like it’s unusual! Aye Stevie and me do spend some nights together.


Q:  Since you watch television and sports. Do you watch movies? Which is your favorite one?


Q:  What is your favorite U.S. State?  Why?  Have you ever visited it before?

A.B. McKinley: I like Wyoming, mainly due tae the scenery.


Q:  What is your favorite place/landmark in the States?


Q:  What is your favorite American Holiday?  Scottish Holiday?

A.B. McKinley: Nae really in tae Holidays, but I did used tae like Boxing day back haem.


Q:  What colors are in your kilt?  Do the colors mean anything in particular?

A.B. McKinley:  Mainly blue and green with a wee bit of red and yellow.


Q:  Is it true, that Scots don’t were anything under their kilts? Is there a reason?

A.B. McKinley: Aye it’s true and of course there’s a reason, if I wore anything underneath it I’d just be a man in a skirt!


Q:  What is your favorite place you have been in the World?  Is there a reason?

A.B. McKinley: I’ve been tae lots of countries but back haem would still be my favorite. I like spending time in the Highlands, plus the mountains oot West in America are guid too.


Q:  I heard you like/love vegetables, especially green ones!  Which green vegetable is your favorite?

A.B. McKinley:  I dinnae eat anything green or any rabbit type food.


Q:  Can you tell me a little about the title of Kilted Desire’s Book Two, Russian Roulette?

A.B. McKinley: Aye a wee bit, the title does kind of give it away where one of the main locations of the story is ;) It’s a very explosive book, reet fae the first chapter and there’s action, romance and adventure all the way through. Plus a wee bit of discreet humor in places too ;)


Q:  I see from looking through your Book Page on FB, you consider yourself a lone wolf…..But, if you only had the following, would you be more like a kitten or a puppy in demeanor?

Q:  I saw the kitty in your fuzzy purse on your Facebook page. Is that your kitty?

A.B. McKinley: That’s nae a picture of me! Just some dude with a kitty in his sporran. I dinnae have any pets.

Q:  What is the first and second thing that draws you to a woman?


Scott Maclaren, a strong, Special Forces Scotsman, terribly injured during his tour of duty in Afghanistan. His journey begins with a  after his wife leaves him for another man during his time in the hospital. Traveling across the Atlantic to visit family, his story now begins.
After years of  and being alone, things were about to look up. , a beautiful Ohio schoolteacher, was where his ‘dream’ of passion and love were to become reality. Smoldering embers became a passionate, raging fire between them. A wanting and desire that burned for one another as neither had ever experienced before.
Scott’s love for Katie and her two girls would lead him to great lengths to make all their dreams come true, including a six-month security contract in the Middle East. The money would ensure financial security for life.
The contract was to secure the safety of a young attractive businesswoman, Britney Parnell, who is accustomed to getting what she wants… and she wants Scott. She wastes no time in making her yearnings known. All can see her motives, but Scott. His only thoughts while in Baghdad are to keep her safe amidst terrorist attacks, shootings and bombs exploding all around them…
This sensual, sexy adventure begins with the ultimate betrayal and is filled with action, intrigue, passion and steamy love scenes.
Inspired by true events…

Kilted Desire, Sands of Betrayal by author A.B. McKinley is a superbly written action/adventure, romance.
This wonderful story is a somehow the perfect blended mixture of a hero of military background and raw sensuality. You feel the war torn middle east and actually see the picturesque Scotland as if you are there. Guaranteed to leave you want more and longing for book two to be released December 15, 2012 (this month, can't wait!)

A.B. McKinley's Fragrance
MacHollister for Him and Her

Kilted Desire at Barnes and Noble 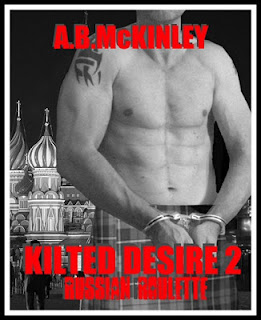 After his recent adventures in the Middle East, all Scott Maclaren wanted to do was relax. He looked forward to his new life as a family man.

But, things never seem to ‘go-as-planned’ for the tough Scotsman.

Soon, after his return to the U.S., Scott finds himself catapulted back in to the thick of action. Once again, he is called upon and will need of ‘all’ of his Special Forces skills, as he battles new foes.

The excitement and drama heat up, both inside and outside the bedroom in this romantic thriller. This suspenseful sequel is filled with even more action, adventure and passion.
Posted by Diana Marie Jacobsen at 8:33 PM