Christie Meierz was born in Chicago, brought up in Southern California, married in West Virginia, brought up her children in upstate New York, and now lives in Pittsburgh, Pennsylvania with her husband, one of her four sons, her piano, and a very sharp oboe. When she's not writing, she enjoys reading, quilting, knitting, and trying to keep her menfolk from telling odious puns.

Do you believe in aliens?  Well I had the pleasure of chatting with Christie Meierz about her new book "The Maraan".  Set in the 26th century her book The Marran is a scifi love story.  So let's step aboard the ship and get ready for a wonderful and joyous journey to another planet. 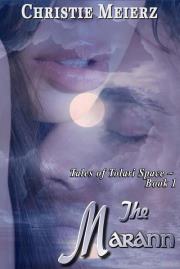 Q: We understand this is your first book. What made you decide to write a Science Fiction?
Christie:  I grew up mostly reading science fiction and sneaking my mother’s romance novels to read. It seemed natural to combine the two. That said, it’s really more speculative fiction than science fiction. I’m playing with some what-ifs.

Q:  We would love to know why you decided to write your book in a futuristic setting, which is far from the norm?

Christie:  When I first started writing it, I was actually more interested in exploring the possibilities of a planet populated by empaths. The love story wove into it after I’d developed the world.

Q:  Your book is set well into the future.  How would you perceive  the future in the 26th century?
Christie:  The nice thing about speculative fiction is that it can be whatever you want it to be. It’s not very obvious yet in this first novel, but human high society is going through a very neo-Victorian period in the 26th century: lots of randy goings-on behind closed doors, but don’t ever talk about it.  If you do, women blush, and men get uncomfortable.  Other than that, obviously we’ve got faster-than-light travel and instantaneous communication across interstellar distances.  I had to do a lot of research to get the travel times right.

Q:  What does the title The Marann mean?  Is there any significance?

Q:  In the book, Marianne speaks many languages.  Can you speak any other language(s)?

Christie:  I speak 4 languages: Russian, French, German, and Spanish, in order of proficiency.

Q:  If given the opportunity,  would you be willing to go to another planet to learn or teach?
Christie:  In a heartbeat!

Q:  Do you believe there are other beings out in space?

Christie:  I don’t have the faintest clue, honestly, but it seems to me that as vast as the universe is, probably anything that can happen will happen, sooner or later. Whether there are other beings out there right now is another question entirely, or if there are, they might be galaxies away.

Q:  Where did you come up with the names for the different aliens and planets?

Christie:  I use fantasy name generators. I set them to spit out a few hundred names, and then play around with the output. I rarely leave a name unmodified.

Q:  What author has been your biggest writing- influence?

Christie:  Anne McCaffrey, hands down. I’ve been reading and re-reading her Pern novels since the 70’s. Other influences are Frank Herbert and his Dune novels, and – believe it or not – Jane Austen.

Q:  What types of books do you enjoy reading?

Christie:  I read a lot of different books. I enjoy a lot of classic science fiction and fantasy. I love romance, especially historical romance, and particularly regency. I read a lot of classic fiction, like Jane Austen and the Brontë sisters. I’ve only recently come to discover urban fantasy and paranormal romance, but I’ve been devouring a lot of those lately – HP Mallory, JR Rain, Jeaniene Frost.
Q:  When you are not working what do you enjoy doing with your free time?

Christie:  I read a lot. I occasionally attend a class or two at University of Pittsburgh, studying music theory (I play piano and oboe) or Spanish. I also do quilting and knitting.

Q:  Are there plans to write more books?

Christie:  Absolutely! The next book in Tales of Tolari Space is written: Daughter of Suralia – look for it in probably early 2013. I have the second half of the third book written, as well as some of the scenes in the fourth.

Q:  If you could  "camouflage" what would you do with this ability?

Christie:  Sit in on classes at the University without having to pay for them.

Q:  The Tolari are empaths in the story. How would you personally feel being near an empath?

Q:  Do you believe people have free choice to do what they want?

Christie:  That’s a deep question. I can freely choose my actions, of course, but I don’t believe I’m free to do whatever I want, no. I have personal, family, and social responsibilities. I have to weigh the benefits to me or mine against the cost to those around me. Life is a balancing act.

Go pick up your copy of her book at the following:

BARNES AND NOBLE
Posted by Diana Marie Jacobsen at 9:44 AM