Working at the library has given me a sense of pride in joining the ongoing problem of censorship in books. While doing a project for work on banned book week, I was amazed at the number of books that had been challenged over the years.  I was shocked, I guess because I had always been allowed to read whatever I wanted.  I was amazed to find out that more then 11,300 books have been challenged since 1982.  Books that I never thought of to be wrong and I thorughly enjoyed.  Reading to me was a sort of escape from the real world.  I just jumped into a book with both feet.
﻿ The 10 most challenged titles of 2011 were:
For more information on banned book week or banned books

here you can search to see frequently banned books

Don't let books be banned, make them happy read them!!!! 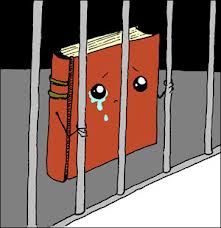 Posted by Diana Marie Jacobsen at 11:47 AM